This weekend up at the Air Force Museum at Wright-Patterson AFB, three of the four surviving Doolittle Raiders gathered for one final somber and sad mission.  Robert Hite, the other surviving Raider, was too ill to attend this gathering.  So Ed Saylor, Richard Cole - Doolittle's co-pilot, and David Thatcher gathered at the museum to break open the 1896 bottle of cognac to salute their departed comrades.  Why 1898?  That was the year Jimmy Doolittle was born.  With this solemn action, another chapter of valour closes.

I was so fortunate to see Saylor, Cole, and Thatcher at the 71st Reunion earlier this year.  To shake their hands and say thank you.  Thank you again Raiders for lifting American spirits when it seemed the future was so bleak.

World War II in Germany is just a flyleaf on a book away. Might be found on a stretch of road.  Or that person sitting next to you on the S-Bahn in Hamburg or Berlin.

Margot Friedlander was rounded up in April of 1944 after being in hiding for 13 months.  She was sent to the concentration camp of Theresienstadt which is now in the Czech Republic.  She met her husband there and they emigrated to the United States after the war.  Since neither had family left in Germany they had vowed to never return.  Time moves on and Margot's husband died.  She wrote of her wartime experiences and even had readings of her story.  A German producer happened to hear one of her readings and invited her to come back to Germany for a show.  She did and then something incredible happened, Margot decided to live in Berlin. She tells her story to German youth who know of the Final Solution only in books.  She gives a voice and face to the horror the Nazis inflicted upon people.

In Aachen Germany the locals are trying to preserve a tangible piece of World War II history.  Aachen was the first German town to fall to the advancing Allied armies.  The fighting was fierce as the Germans tried to hold the Siegfried line, thus casualties on both sides were heavy.  Directing the German defenses of Aachen was the Lousberg bunker.  The bunker still exists but has now been sold to developers who want to turn it into apartments.

Another bit of Germany's Nazi past is about to be paved over.  Near Berlin is the A11 motorway.  About 2.5 miles of the road is still the original surface that was laid down by the Nazis when they first built the autobahns.  After many decades and heavy traffic, the concrete road surface is in such poor shape it will be replaced in 2015.  Thus erasing the last bit of the original autobahn.

Finally there is the story of Jennifer Teegee of Hamburg.  Her mother is German and her father is Nigerian.  Until she saw a book in the library and on the flyleaf a picture of the author she had no idea of her family history. She had been given up for adoption and when she did see her birth mother, Monika never talked about it.  But from that book she learned that her mother was the illegitimate daughter of Amon Goeth, the real life Butcher of Plaszow as depicted in Schindler's List.  Jennifer had seen the movie while in Israel and knew her birth name, but she never made the connection until reading that book.  Since that discovery, Ms. Teegee has embarked on a quest to fully understand her heritage and family history.
Posted by Anna at 1:38 PM No comments:

This inscription is found as part of the WWII Memorial in Washington D.C.

"Earned our undying gratitude,"  I wish the current President of the United States and members of the Democrat Party could comprehend such words and honor them.

Instead today we saw a great injustice attempt to be perpetrated upon some of the rapidly vanishing cadre of WWII veterans.  69 years after many stormed the beaches of Omaha, Sword, Juno, Gold, and Utah and others stormed ashore at another place called Inchon some of those went to see the WWII Memorial as part of an effort called Honor Flight.

Veterans from Iowa and Mississippi went to the memorial today to find a very strange sight.  The normally open memorial was barricaded.  The excuse being it was closed due to the government shutdown.  These veterans showed they still had courage even though many are now confined to wheelchairs.  While Rep. Steve King and others launched a diversionary attack that distracted the unpaid Park Police, the veterans breached the barricades to see the memorial dedicated to their sacrifice and valor before they to finally joined their compatriots among G_d's Battalions.

I squarely blame the Democrats for this cheap and tawdry attempt to punish those who risked all to defend this country.  To attempt to score cheap political points by disrespecting these veterans' service.  To be respected, one must earn respect.  Today all the Democrats have earned is an even greater amount of contempt.

President Harry Truman is best know for a few turns of phrase.  But one that applies in this case comes from a citizen.  "Give'em Hell Harry!"  Lets give the Democrats Hell over this.
Posted by Anna at 6:16 PM 6 comments: 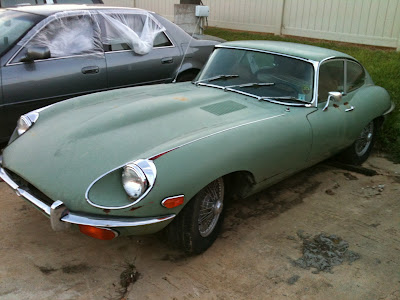 Coming out of a restaurant this evening and happen to glance over at the oil change place next door.  In the back parking area I spied this Jaguar.  Hurried over and snapped a picture with phone.  Car is in rough shape but I never thought I would ever see one in person.  Think will visit the place Monday to find the story of this car.

So today Sept 30, 2013 go see this car in daylight.  After looking the car over, this one you walk away from unless you have a lot of money doing nothing in the bank.  It is a Series 2 XKE 2+2 4.2L with manual transmission.

The rust issues are far worse than originally thought.  That dark line where bonnet meets the sill in the above picture is not a shadow but rust.  On the passenger side bonnet sill with the lock, its the bonnet sill itself that is rusting.  The passenger headlight bucket also has corrosion.  The passenger door paint actually has multiple cracks in it of over four inches.  The little valley in the sheet metal between the driver rear wheel arch and roof has a large patch of paint missing showing primer and rust. Some of the wires in the wire spoke wheels also show oxidation.

All the glass is present.  And the chrome seems in good shape.  Passenger front turn signal lens is broken.  Inspection sticker on windshield says 2003.  The butterscotch colored leather interior seems to be there but the driver seat is badly ripped and showing padding.  The glove box is open and a mess of wiring is spilling out, get the feeling someone has been thwarted by the British electrical system when trying to install an aftermarket radio.

Needless to say, without talking to the people at oil change place, I have determined this car will not be finding a place in my garage.
Posted by Anna at 11:01 PM 5 comments: 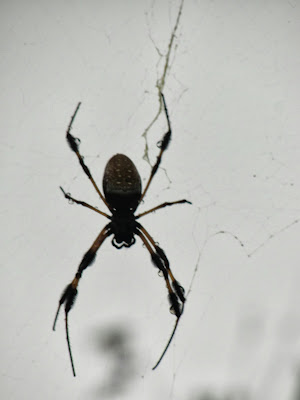 This one set up web-shop between two trees.  Size of this giant?  At a guess over four inches.
Posted by Anna at 7:23 PM 5 comments: 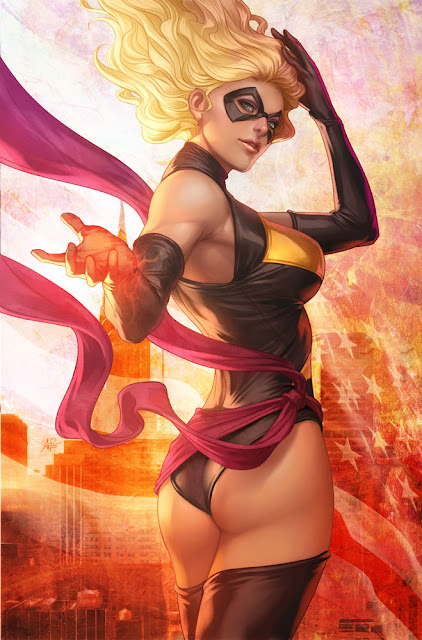 Original can be found here on DeviantArt.
Posted by Anna at 6:04 AM No comments:

Well it certainly looks like the United States will be making some kind of military action in revenge for the killing of civilians by chemical weapons in Syria.  Even though the issue remains cloudy as to who did it, the word of the United States is now on the line.

Secretary of State John Kerry has been making the case along with Secretary of Defense Chuck Hagel before the Congress on this matter.  I would find the irony delicious that we have John 'Genghis Khan' Kerry pushing for American intervention in a country with far less military and political significance than South Vietnam except the dangers from one mistake in this country called Syria are far greater than any faced by the United States in South Vietnam with a defeat.

It would have been fitting and encapsulated what could easily become another street without joy.
Posted by Anna at 1:10 AM 5 comments: