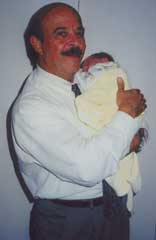 Five years on, moss grows fast on a rolling stone. Here I sit in front of a monitor pitifully typing out inadequate words trying to honor such a wonderful person whom I never got the chance to meet and I am a poorer person for not doing so.

What I read of Louis F. Aversano makes me think of him as the person every American strives to be. A person of strength, a great sense of humor, and compassion. Someone who knows family and friends are important. And even gentleness as I read how he doted on five fish in an aquarium, talking to them as if they were more of his children.

The morning of September 11th, 2001 found Louis at his normal place of work, just another day starting at 6a.m. His office being on the 94th floor of World Trade Center Tower Two, the south tower where he worked for Aon Corporation as Director of Operations Support-Risk Services. Louis had been working for Aon for 8 years, ever since he was downsized at his previous employment. It was his youngest daughter Lisa, who worked at Aon as an account executive, that got him to apply at Aon. And it was two weeks prior to 9/11/2001, at the urging of her father to move on with her life, that Lisa left Aon for a job a few blocks away on John Street. And that was where each was when the first plane struck the north tower.

The plane to strike the south tower impacted between the 75th and 84th floors. All the stairways were severed in the central core trapping people where they were. All elevators except one was disabled and that elevator only went to the 16th floor. All that is known about Louis's last moments is he called Lisa after the first plane struck and told her he was evacuating. That was the last time Lisa talked with her father.

Louis F. Aversano Jr was born on February 14, 1943 in Brooklyn. He died September 11th, 2001 when tower two collapsed 47 minutes after impact at the age of 58. He is survived by his wife Doris, three daughters, one son, three grandchildren, and five fish.

Stalin once said: "One death is a tragedy, one million is a statistic."

With the loss of nearly 3,000 lives on September 11th we often forget that each one is a tragedy.

Each death need never have happened. Each death left friends and family members behind.

We owe to the children who are without fathers or mothers to do ALL we can... and I MEAN ALL, to defeat the evil that brought this nightmare to our nation.

I echo Mike's sentiments and thank-you for this wonderful tribute!!

Another beautiful tribute. Like you, Anna, I feel the less for not knowing Daphne and Deeg was a son anyone would be proud of!

And as Mike said, deaths made all the more tragic because they never should have happened.

THank you so much for this touching tribute. It is heartbreaking to hear of the loss of this good father and husband. Thank you for taking the time to do this. God Bless America!

The WordSmith from Nantucket said...

God bless Louis F. Aversano Jr and those who loved and cared for him.

Wonderful Tribute!
Thank you.
These are heartbreaking stories and difficult to read....
I am honored to be a part of this project.
Mine is posted also...

Mike, LMC, and Anna; I am reminded of a Jewish phrase I seem to have absorbed from Schindler's List. If you save a man, you save a world. On Sept 11, 2001, 2996 worlds were destroyed by people who love death more than life. Lets try and prevent more innocent worlds from being destroyed.

Rosagirl, thank you for commenting. Looked at your Photshop blog. I will be revisiting to learn from an expert.

Skye, thank you and commented on your tribute.

Wordsmith, amen. Blessed be all the families of the victims.

Raggedy, I read your tribute. MIT no less and cruising the Aegean. Truly a man to have as a friend and in your lifeboat. Another world destroyed by evil.

For whatever reason, I found myself on your page today. Re-membeirng my Dad Lou. His Spirit is Alive in me today and inspiring me to continue living close to my heart and in service of the greater good. Thanks Dad!